The Republic of Armenia gained independence from the Soviet Union on the 21st September 1991. The United Kingdom recognised the independent state of
Armenia soon after on the 31st December 1991. It is a parliamentary democracy.

The capital city of the Republic of Armenia is Yerevan. The state has a population of approximately 3 million. 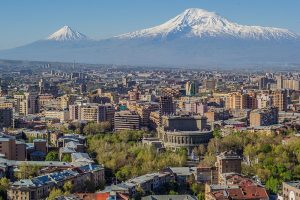 Armenia is one of the earliest Christian civilisations, Armenia’s first churches were founded in the fourth century.

Today, the Republic of Armenia is bordered by Georgia to the North, Turkey to the East, Azerbaijan to the West and Iran to the south. It is land locked, without any access to the sea. The current political landscape is tense, with an illegal blockade imposed on Armenia by both Azerbaijan and Turkey.

Relations between the UK and Armenia excelled quickly, with the first Armenian Embassy in Europe being established in London in October 1992. 3 years later in 1995 the United Kingdom officially opened an embassy in the capital city of Armenia, Yerevan.

Over the years there have been numerous state visits between the Republic of Armenia and Britain. The most recent official delegations include the British Minister of State for Europe David Lidington to Yerevan and Former President of Armenia Serzh Sargsyan visiting the United Kingdom in July 2012.

Armenia is rich in minerals, gold and diamond. It has a highly educated population and it is becoming a hub for technology.

Armenia is a mountainous country. It is a safe, and clean country with rich history and culture. The population is friendly and hospitable. The spoken languages are Armenian, English and Russian.

To improve mutual prosperity and security

To expand trade, increase aid, further develop mutually-beneficial political, economic, security, military, and peacekeeping cooperation, and elevate the frequency of bilateral visits at the level of head of state/government

Security of Armenia will achieve stability in the region